Every now and then you have to take a step back to move forward.  This is not quite the case with intelli-CTi but it is fair to say that there has been a LOT of re-engineering carried out as part of the intelli-CTi for Dynamics 365 V4 release.  Most of it will never be seen by the user but has enabled the product to be well-positioned to move forward in a number of areas with future releases.

Coming from a user perspective, there has been a collection of minor enhancements, performance improvements and a few bugs squashed! An often-requested feature, now available, was to start intelli-CTi as Windows starts – it is sometimes the small things that make a difference!

We have also spruced up the Virtual Telephony Server (VTS), the included “utility” to enable demonstrations and testing without the need to be connected to a phone system.

Stepping back a little, from an overall customer perspective, a key area enhanced with this release has been the licensing and user management. The two key enhancements are: 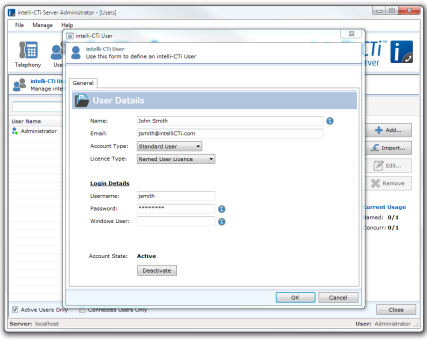 This is all managed through a new element to the intelli-CTi server that enables the customer to manage who has access to what licences.

Should you be running certain hosted phone systems like Skype for Business or Broadworks, we will host the server for you. If you run an on-premise or more traditional telephone system then you will be required to locate the intelli-CTi server within your infrastructure.

Another common feature request was to have the ability to configure, rather than need to customise, intelli-CTi to incorporate custom phone fields and/or entities that included phone fields.  So, for example, if you added custom phone numbers to Accounts, Contacts or Leads, it is now possible to have this included in the intelli-CTi subsystem for inbound and outbound calls, via simple configuration.

For the more technical among you, we have brought the entire client up to .NET (removing the last traces of legacy VB code – hurrah!).  This will allow us to easily add support for non-English languages in the UI and support the planned User Interface (UI) look and feel refresh, as well as feature enrichments in forthcoming releases. 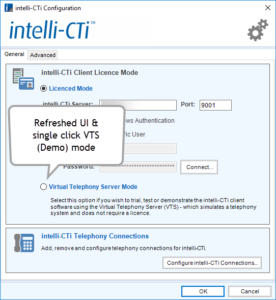 We have applied a level of UI look and feel updates to the configuration management areas, but we have been waiting to see the way Dynamics 365 is heading in terms of its UI refresh, to ensure we blend our user UI update in line with the new and future UI from Microsoft.

Note only the V4 product will support future Dynamics 365 security or end point changes.  i.e. the announced TLS 1.2 changes. intelli-CTi V1.X users will need to upgrade.  Access to the V4 release is included within a currently active Support and Maintenance contract.

If you are interested to know the details of the new release, the Release Notes available here:

See the intelli-CTi Help Center User Guidelines for important considerations of use.